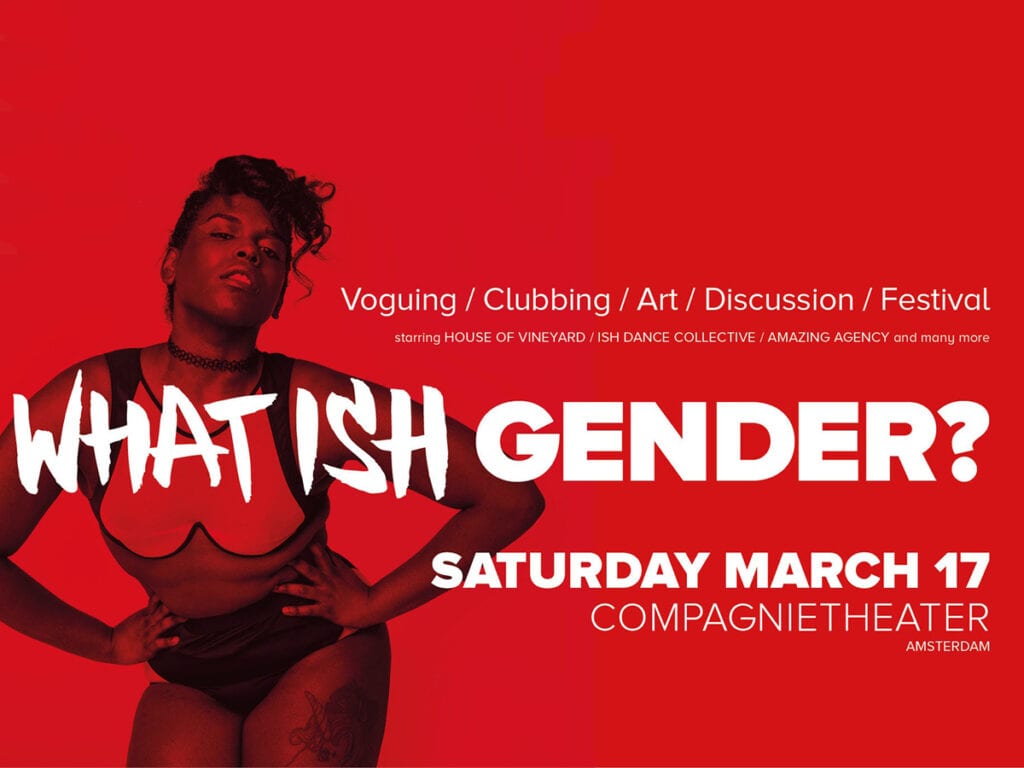 WHAT ISH GENDER? Is the first in a series of events by ISH and Compagnietheater about topics that matter to us. Creative, inspiring and sometimes provocative.

GENDER?!
Some (unfortunately most) people know two gender types: ‘men’ and ‘women’. Your sex dictates your sexuality, identity and behaviour. And that’s that. But more and more people are starting to protest against this narrow minded way of viewing gender. How important is gender for who you are and how others see you?

FESTIVAL
With WHAT ISH GENDER? ISH brings a range of artists, thinkers and performers together in an eclectic festival. Dance, music, art and clubbing come together and form an informative, powerful and cheerful plea against gender labelling. 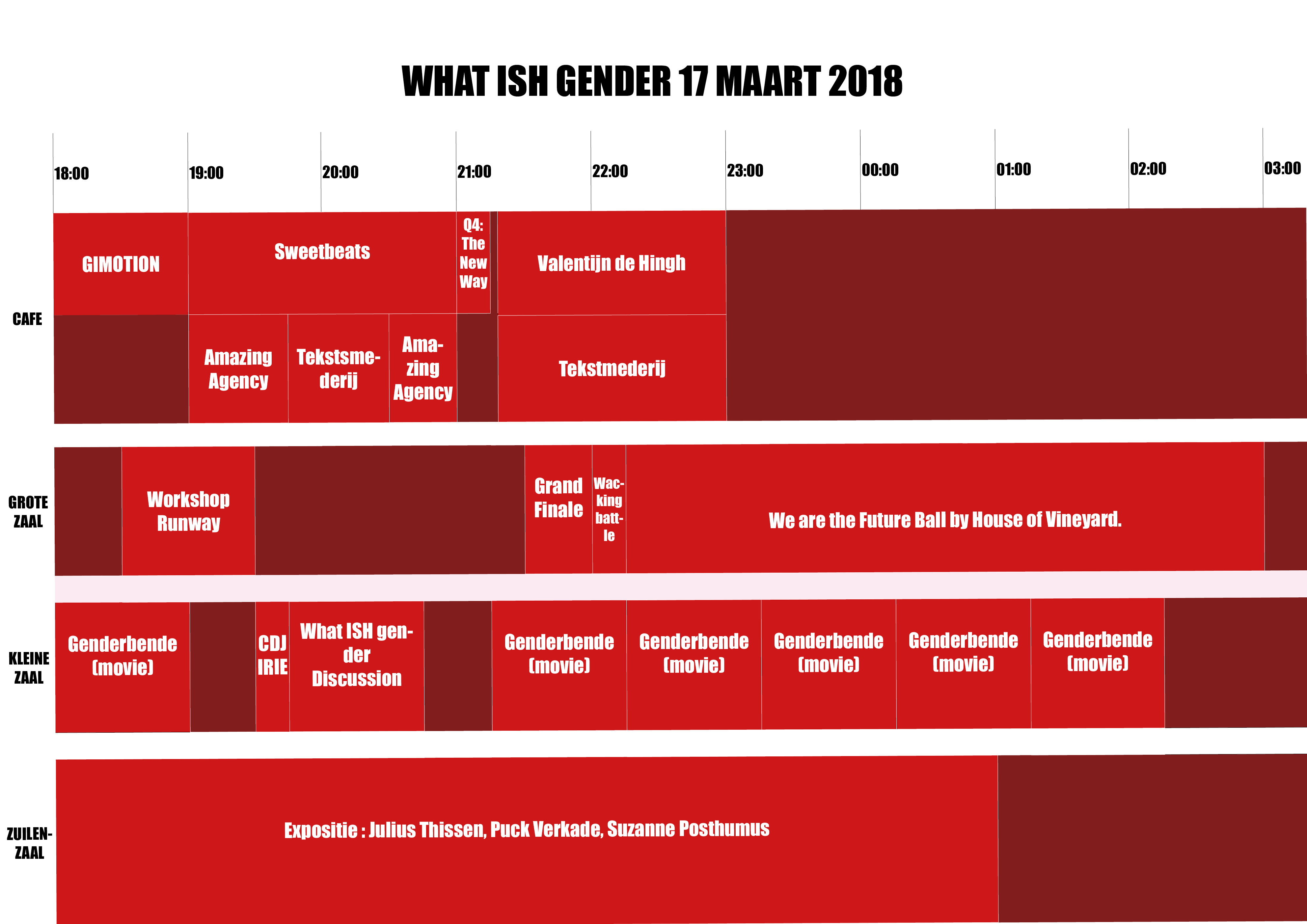 House of Vineyard met “We Are the Future & The Future is Fluid”
Our very own Ballroom house, House of Vineyard, will fill the evening with voguing dance, fashion and realness. You cannot miss this. About the birth of LGBTQ Ballroom culture: participants are often a member of a ‘house’, like House of Dupree, House of Ninja of House of Omni. These houses would come together in ballrooms to battle-dance against each other. Houses would do anything to impress the jury and challenge each other. This resulted in spectacular performances with extravagant dancing and fashionable costumes. These evenings were called ‘Balls’ and participant where mostly members of the LGBTQ community with African-American or Latin roots.

Lose yourself in the beats and be surprised by the acts of the Amazing Agency. This Amsterdam branch represents people who are autonomic and not influenced by the norm. 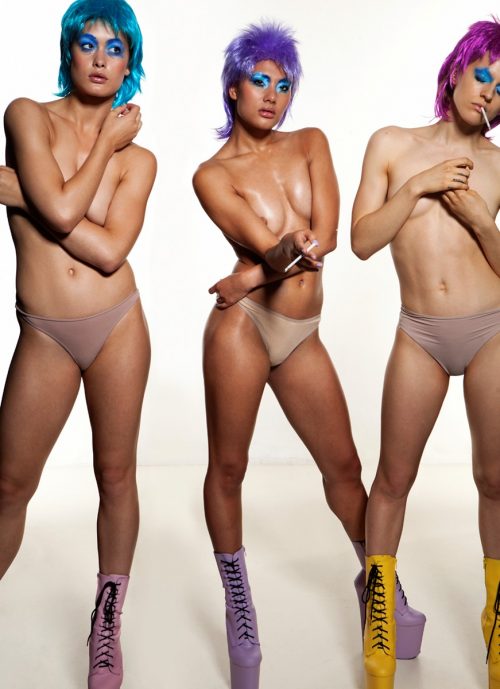 In his live loopstation performance, artist GIMOTION samples his voice into a soulful, rhythmn driven soundscape and dances with his words on top. Words becoming; spoken word poetry, songs, rap verses and even dance movement. He creates an intimate space where he shares stories about his personal journey of becoming. A space where less is more and where you will feel like dancing.

“Life is as real as it feels and i feel like offering some of my real to the real that you feel so we can feel together, so we can get real together” 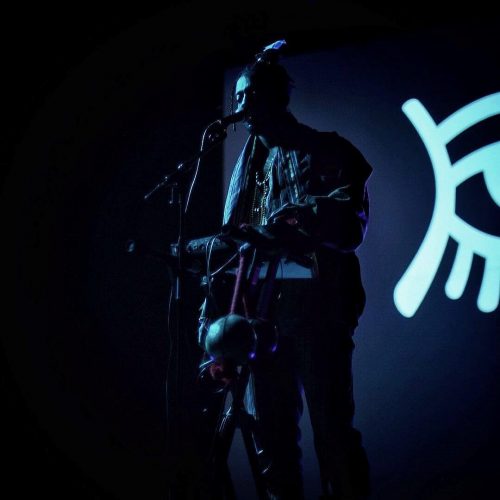 How does our inner world take shape? And how does the outside world influence this. What makes us an individual? With these questions Sarada Sarita dives into patterns of structure in human lives. She shines a light on the labels we give ourselves, others and the world around us. A special act, made for WHAT ISH GENDER?

Sarita grew up in a dance and theatre family and started to participate in school plays and talent shows from a very young age. After graduating from Lucia Marthas dance academy in 2018, she was asked by Lucia Marthas to choreograph different tv-performances. She was also granted several scholarships (Monster of America, Orlando USA, Pulse Convention, New York) and took dance lessons at the “Millennium Dance Complex” in Los Angeles and choreography lessons from Gill Dulduao, who directed and choreographed Janet Jackson. 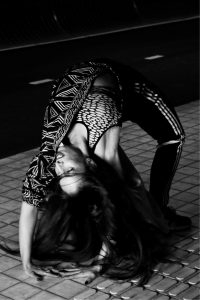 Everybody wonders about what other people are talking or thinking about. What is that bartender thinking? Or why is that girl looking so worried? At What ISH Gender, we rewrite reality and the guests are protagonists. Ingredients are the writer, the visitors and a lot of fantatsy! 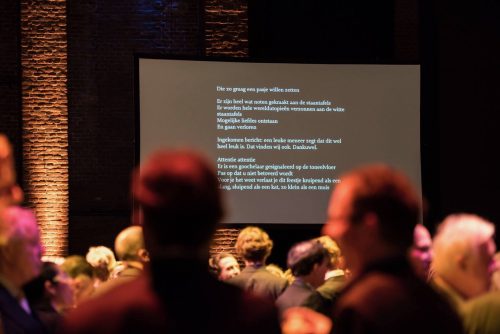 Doing Gender
The exhibition Doing Gender is curated by Jeanette Bisschops, and features work by three young Dutch artists who seek to explore gender roles by addressing the social control and expectations our bodies are subjected to. 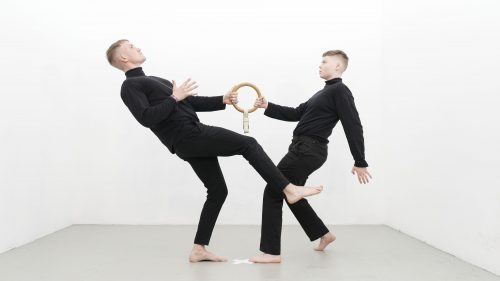 Julius Thissen (for bio scroll down)

Suzanne Posthumus (for bio scroll down)

Puck Verkade (for bio scroll down)

Jeanette Bisschops (for bio scroll down)