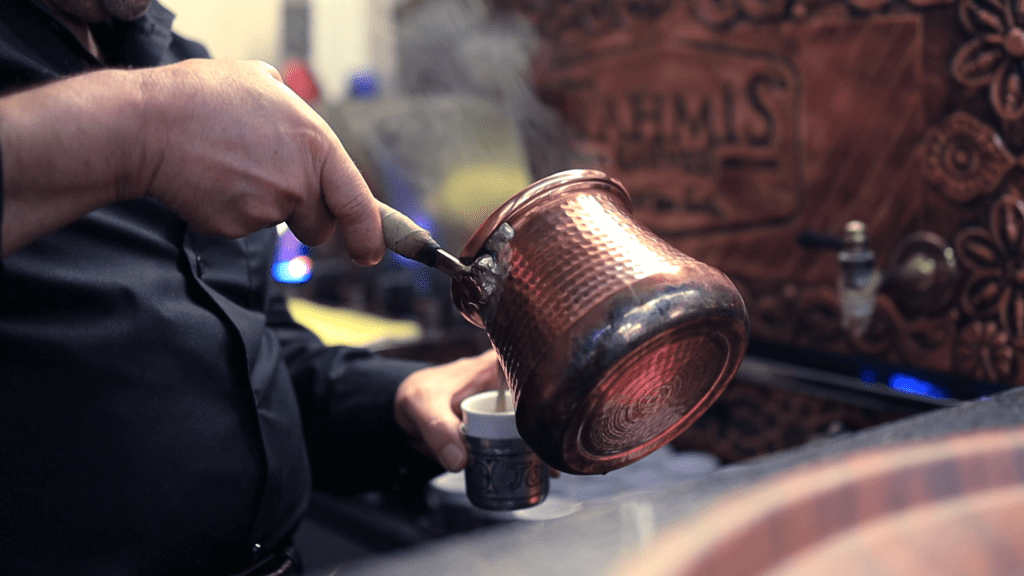 Curator of this series, Ahmet Polat, invites us to the second episode of his pop-up coffeehouse The Coffee Reading, a series of talks in which we celebrate the tradition and art of conversation: listening, learning and finding common ground. On the 7th of December at 8PM, we premiere the second episode on Compagnietheater’s channels. Join as we practice the ritual of drinking and reading Turkish coffee, while we listen to the enlightening stories by our host Ahmet Polat and his guests: Ilvy Njiokiktkien, Malika Ouacha and more.

In 1554, the first two coffeehouses opened their doors in Istanbul. They became social meeting places and soon acquired the identity of intellectual clubs where men from different backgrounds played games, debated, shared information and learned.

Polat explains: “To me, a coffeehouse seems the most logical place to arrive, to connect, to observe and listen, question, reflect and to relax at the same time. In 2019, I traveled to the city of Gaziantep with my father; the city of my ancestors which my father hadn’t visited for more than 40 years. He took me to Thamis Kahveh, the Turkish coffeehouse my grandfather used to work as a young man. Soon, you start talking to the people sitting next to you, sharing personal anecdotes and future endeavors. It really is a home base of some sort.”

For The Coffee Reading, Polat took the concept of the Turkish coffeehouse (as a place to come together and connect), and Turkish coffee reading (as a ritual to talk about the future and practice the art of conversation) as a starting point for the evening. As we drink the coffee imported from Thamis Kahveh, Polat’s ancestor’s coffeehouse, we go through the rituals of coffee reading together.

Meanwhile, we dive into conversation with our three guests, Ilvy Njiokiktjien and Malika Ouacha. Amongst others, we touch the subject of the newest #Metoo scandal surrounding Dutch artist Juliaan Andeweg: how is this a structural problem in the arts scene? And how is power yielded in the worlds of arts, cultural and education? What could be the path to a solution and healing? What is the role of the (female) artist in this?